Wired 01 will be a collection of 64 presets for Bazille.

I've been working on this for quite some time and it's almost ready.
Wired 01 will contain all kinds of sounds, from beautiful pads to big basses and weird modular bleeps and bloops!

You'll recieve the download link on the first of July 2014.
The regular price after that date will be 10.00€
Posted by Bronto Scorpio at 12:26 AM 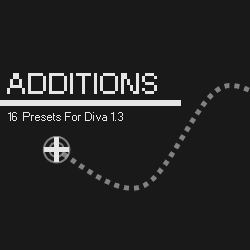 Additions is a small collection of 16 preset for Diva and is meant to be an addition to the Dimensions soundbank.
The 16 presets, which range from strange atmospheres to smooth arpeggios, were made to compliment the Dimensions presets nicely, but can of course also be used on their own!

As usual, great attention has been paid to small details and most of the presets have many MIDI controls assigned, to make them as flexible as possible.


You can listen to an audio demo of the bank below. I only used sounds from the new Additions bank, and no external processing for the demo.

Posted by Bronto Scorpio at 2:54 PM 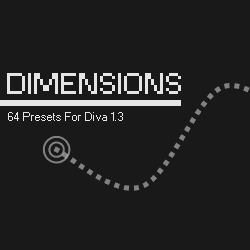 Dimensions is a collection of 64 patches for Diva 1.3.

This soundset makes use of all the new features of version 1.3 and pushes them to their limits.
The goal was to take the limited structure of Diva and get the most out of it using various little tricks.
The result is 64 new patches, which range from classic synth to more modern, futuristic and even somewhat experimental sounds.
All of these new patches are very detailed and use all the features of Diva to "maximise" them as much as possible.

10 free demo presets from this bank can be downloaded here.

You can listen to some audio demos of this soundbank below. I only used sounds from the new Dimensions bank, and no external processing for the demos.

I promised to share some Reaktor stuff for quite some time now, and as today is my birthday, I thought it would be a good time to do so.

The main inspiration for this ensemble were those awesome demos of modular synths you often find on the internet. When watching those videos I'm often thinking "Don't ever turn a knob again! That's the best sound ever!" *Guy in the video turns a knob* "Wait! That's even better! Now definitely never turn a knob again!".
I tried to capture this feeling with this ensemble.

It comes with a bunch of presets, but it's really meant to be tweeked and explored.
The whole thing can be a bit unpredictable, as there is a lot of feedback going on, but that's part of the fun!
Many of the controls are somewhat cryptic, but you'll eventually get a feeling for each of them.

I tried to include as few controls as possible, each control really does something. I also didn't add a whole bunch of effects, to keep the ensemble focused.

The "Chaos" control is something special, as it feeds back signals from certain points back into other points. When turned up, it uses a part of the output from the third shifter to calculate the sub oscillator for example. I suggest to keep this control down while exploring, and turning it up once you found a cool sound to get all kinds of cool effects.

Here is a small video demo:


I hope some of you will have some fun with this ensemble!
This ensemble was made using Reaktor 5.8 by the way, so you don't need the latest update for it.

Update!
I just uploaded version 1.1 of this ensemble. This version adds optional MIDI gate and pitch to the ensemble. The controls are accessible on page B of the ensemble.
I also made finer control over the pitch of the operators possible. To fine tune them, simply hold down shift while adjusting the fader.
The state of the MIDI gate and pitch buttons won't be saved with the preset.

Another Update
I uploaded version 1.2! This version fixes a tiny bug and adds a few new presets.

As my financial situation continues to get worse, I decided to put a donation button here.
I initially wanted to only leave this button here on my birthday, but people convinced me to leave it here. If you have some spare money and appreciate some of the free stuff and advice I've shared over the last few years, or just like some of my music, consider a small donation:

Transition FX 01 is a collection of 33 booms, splashes and build-ups. These kind of samples can be very useful for transitions in any kind of genre.
All samples in this pack were designed completely from scratch.

You can download the sample pack here.
Posted by Bronto Scorpio at 1:15 AM 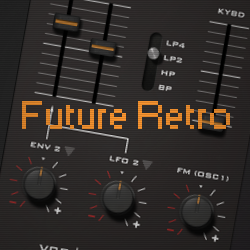 Future Retro is a collection of 64 presets for Diva!

Diva is famous for the ability to authentically recreate the great synthesizers of the past. However, I tried to go a different direction with this set. Many sounds are inspired by the past, and use Diva's great sound design potential to go way beyond vintage sounds into the future!

10 free demo presets from this bank can be downloaded here.

You can listen to an audio demo of this soundbank below. I only used sounds from the new Future Retro bank, and no external processing for the demo.

Posted by Bronto Scorpio at 4:33 PM